Last night we learned of a unique hockey rink in a giant farm shed on a farm in Madison Lake, a small town in Southeastern Minnesota.  It’s called Schulz Rink of Dreams in honor of the late Paul Schulz.

Schulz was a hockey fan of epic proportions.  His love of hockey was so great that when he needed to build a shed to store his farm equipment, he built one with floor space in excess of 200 by 85 feet, and overhead clearance of 15 to 20 feet; So that some day, in the winter, he could convert the shed into an indoor hockey rink.

At some point, Paul acquired a complete set of used arena boards and plexiglass from an arena that was replacing them.  Thirteen years ago– before he assembled the Rink of Dreams for the first time, Paul also bought a used, 1962 Zamboni ice resurfacer.

With great effort, he assembled all of this equipment into a complete ice hockey rink with natural ice.  He offered this ice surface to all comers in his community for free.

After the first season of operation, Paul died of a heart attack, while planting his fields for the growing season.

In the 12 seasons since he passed away, Paul’s widow Stacy Schulz-Pope, Paul’s family, and friends have reassembled and successfully operated the rink.

After seeing this story online, we decided to add Schulz Rink of Dreams as the 4,650th arena in RinkAtlas:

We added Schulz Rink Of Dreams in Madison Lake, MN to RinkAtlas, https://t.co/Tq00OvL8cM!

On Sunday, February 11, 2018, Boyd Huppert reported for KARE 11 Television from Madison Lake, Minnesota about this unique hockey rink.  The 5-minute video that presents this story is a must-watch. It’s the kind of news piece that gives you hope for the future of traditional television broadcasting.  It tells a story of a place that most people have never heard of, but would want to know exists even if they don’t eat, drink, and sleep the sport of hockey like we do.

Upon further reflection, we realized that a local news report, no matter how heartwarming, probably wouldn’t go viral without a little help in a lot of different places.  If there’s any purpose to having a blog on RinkAtlas, it should be to tell stories of people who can legitimately be called the builders of hockey’s future.  The Schulz Family are some of those people.

Here’s the latest arena to be added to RinkAtlas. It’s a place called Shinapest Tooma Memorial Arena in Kawawachikamach, Québec.

We updated @RinkAtlas to add three photos of the Shinapest Tooma Memorial Arena in the Kawawachikamach First Nation, https://t.co/MWmFRH21YY. These photos were contributed by Nicolas Chalifoux of Honco Steel & Joé Juneau. We thank them for helping us put this arena on RinkAtlas. pic.twitter.com/fHpnQOxE9l

This is an arena that you cannot reach by car from the populated parts of North America. You either have to take a train from Sept Îlles or you have to fly in to the nearby town of Schefferville.

A number of people have asked, “Why are you focusing on indoor hockey arenas in the Canadian sub-arctic?”

It’s not that I’m focusing on them. It’s that the goal of RinkAtlas is to include every arena in North America where hockey is played. And when I say that, I mean all of them. Not just the arenas that everybody knows about.

Besides that, two men I know through hockey and through my research, Joé Juneau and Nicolas Chalifoux, have worked in or on this arena and they take pride in it. I try to celebrate that as well.

The game is sold out, but tickets may be available at the gate “if some season ticket holders {who received tickets as part of their ticket distribution} don’t show up.”

Kal Tire Place, a nearby 3,003 seat arena, which is the current home of the Vernon Vipers is adding a second ice surface.  When this new surface is completed later in 2018, it will allow the City of Vernon to close Vernon Civic Arena and continue to offer the same amount of ice time to community hockey and skating programs.

Mission accomplished! RinkAtlas now contains every arena in Canada to go along with our comprehensive directory of American rinks.

The journey to this point began about one year ago. I want to thank my family who gave me the opportunity to focus, my friends who funded the RinkAtlas Kickstarter Project, the friends who shared arena photos from the Alaskan Arctic to South Florida, and everyone who asked me how things were going in person or online. Your support has made this achievement possible.

There is much more to come in the quest to build a directory of the most useful information about North American ice arenas. But getting to the point where all of the states, provinces, and territories were equally represented was Job One.

Thanks to friends like Adam Wodon of College Hockey News, we are gathering historical information about arenas in North America.

One of the documents that Adam found and shared with us is Local Ice Rinks in the Copper Country.This is a history of ice rinks in the western part of the Upper Peninsula of Michigan. Ice Rinks in in the Copper Country talks about a few arenas that existed prior to 1900. But the oldest arena that still exists in that area may be the oldest operating indoor ice arena in the world.

Built with Volunteer Labor During a Mining Strike

The USA Hockey Magazine article talks about the ice plant being built with volunteer labor. During a strike at the Calumet and Hecla (C&H) Mining Company, the striking workers volunteering to build the ice plant.

Indoor Ice Without Refrigeration Until 1968

The Colosseum only installed an artificial ice plant in 1968. It was only able to host indoor ice hockey from 1913 to 1968 due to the cold temperatures on Michigan’s Upper Peninsula during the winter.

Other Claims to Oldest Ice Arena

Some hockey historians claim that Galt Arena Gardens in Cambridge, Ontario is the oldest arena in hockey. But they call it the “oldest continuously-operating ice arena”, which may be a valid claim since Calumet Colosseum doubled as an armory for much of its history.

Local Ice Rinks in the Copper Country calls Galt Arena Gardens the second-oldest arena still in use, opened in January 1922, and Baker Rink in Princeton the third oldest, completed in 1923. These are all buildings that have not been destroyed by fire and rebuilt.

Most NCAA Ice Hockey historians consider Matthews Arena in Boston the oldest arena in College Hockey. It originally opened as Boston Arena in 1910. But that arena burned in 1918 and was rebuilt in 1921. Boston Arena served as the first home of the Boston Bruins of the NHL from 1924 to 1928.

As a result of the articles that Adam has sent us recently, we have a good amount of historical information about arenas that can be incorporated into RinkAtlas.  We’re also beginning a trial project to document the closed arenas in New Jersey with an eye toward writing a history of arenas in the Atlantic District of USA Hockey in the future.

According to the Globe & Mail, the arena’s name will become Scotiabank Arena in July 2018. The cost of this agreement to Scotiabank is reportedly $800 million.

This announcement is uncharted territory for RinkAtlas. Over the past year, we’ve begun tracking previous names of arenas in our directory, but we’ve never know the future name of an existing arena so far in advance.

Should we start tracking future names for arenas?

We completed our arena directory for Ontario today!

Next we’re building a complete directory of arenas in Manitoba.

What makes this article especially interesting is the details of what was said in the presentation to the McKinney City Council, the repurposing of space devoted to ball fields for indoor ice, and the grants coming from McKinney Community Development Corporation and the City of McKinney.

This shows that hockey and skating are growing in the State of Texas, and how committed growing communities in Texas are to continuing the expansion of recreation facilities. [ Thanks to Scott Wheeler for sharing the link where we could see it. ]

The Louisville Kentucky city council and the chairman of their arena authority are discussing adapting the KFC Yum! Center for NHL hockey. 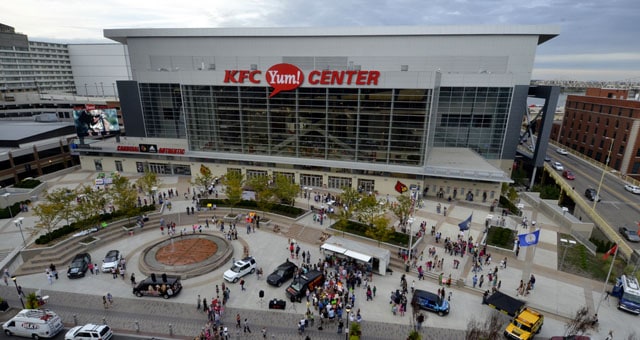 The KFC Yum Center is an arena now primarily used for Louisville Cardinals basketball games. It was originally built without an ice plant because the basketball floor might get slippery, and– why would a lot of people want to go see hockey “that far in the South”?

But then, the runaway success of the Nashville Predators two hours to their south happened.

This is a long shot, but Nashville – Louisville could become a Western Conference rivalry, because the distance between the two cities is easily drivable. [photo of KFC Yum! Center from the KFC Yum! Center website]

We’re pleased to announce that we’ve added information to the directory entries for arenas in the French-speaking areas of Canada to allow RinkAtlas users to search according to the city and arena names as they are typically spelled in either French or English.

We also created alternative city names, so that arenas in Montréal, for example, can be found by searching:

Arenas in Quebec City, which is referred to simply as “Québec” in French, can be found by searching:

We hope that this solves a number of issues with arena and city searches that relate to the bilingual nature of RinkAtlas’ arena directory.  We hope to eventually fully localize the RinkAtlas application to support French as well as English.

Thank you for your support of RinkAtlas!